We are back!!
Out of hibernation...
Crikey! Winter would have to be the craziest busy time of year on the farm, I have lost count of the amount of bales of hay and baleage we have feed out and prefer to not think about the cost of it all (even though Mal reminds me daily) So to have 10 acres of grazing, seven head of cattle, plus two horses fed (just for winter) was well over the 2000.00 dollar mark. So we need to get our A’s in to gear and get the rest of the 42 acres sorted.
So what else has been happening?
Gosh where do I start!
We have had our solar system upgraded and spent the coldest part of winter without power, as the ‘brand new’ generator shat itself which to top it off it began to snow. So out came the board games and the fire got cranked up. Mal emptied the fridge putting everything out in the snow (mainly his beer) (priorities). Three months later we are still waiting for our generator. But on a positive we have learnt one valuable lesson. We need another generator as a backup.  Oh and Mal learnt when you have dogs perhaps emptying the fridge outside was not such a great idea. 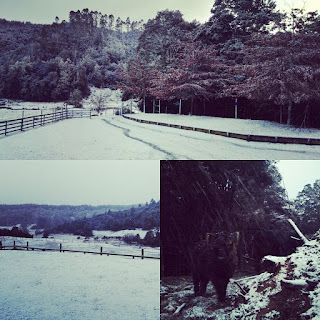 We have also decided to transform one of our paddocks into a fruit tree growing place…hmmm there’s a word for it???........anyhoo (doesn’t spark much confidence with growing fruit does it) but hey, optimism ppl!! Now I know you are going to ask me what fruit trees have we planted and what varieties...right?! well I would have been able to answer that with confidence until Spud (our baby goat) got hold of the trees and ate the tags then ring barked them….curried goat looked very appetising…little shit! So I have no idea what is planted where until they start providing fruit (actually survive would be good also) but I can say, I got black boy peach, 2x Plums and apple. I got one of each to see how they go throughout the year before I put in a bulk order. Plus I have been strictly told to not come home with fully grown fruit trees without discussing it with Mal, apparently he wants to get a digger in to do the holes…no idea why??? It only took 40mins per hole to hand dig (I couldn’t do it as the ground was too tough)….Oh the word is Orchid!!! Nope thats a flower...Orchard? crap! I have a little experience growing fruit trees in town, well I have learnt a few things growing fruit trees in town, well there is a cherry tree growing in town.  But I did learn something!! ….when you purchase a cherry tree you need to purchase two, not wait two years for fruit to grow and wonder why it’s not providing fruit…and when you finally realise you need a second cherry tree and go out to get one, read the tag really well…apparently ‘Cherry Blossom’ is not a cherry tree. Much to the kid’s amusement. I have no idea why someone would put a cherry blossom tree in the same isle as cherry trees…grrr but it was pretty.  So when I got these trees the first thing I asked was if they are, get this..’self-fertilising’ see I know the lingo!

We also no longer have 33 & 34. We learnt very quickly when they are ready for slaughter best get them done. As when you are feeding out the impact on the land and pocket certainly becomes apparent. Even me ‘the animal lover’ realised they need to go. 34 was first, I was terrified, I was scared the Home kill guy would be mean and that the animal would suffer, that he wouldn’t kill him instantly, my head was buzzing with the worst case scenario…but boy was I wrong! This guy won’t kill until the animal is calm and content, he made sure 34 was eating, and before you knew it he was gone. I thought I would be upset but I wasn’t, seeing the carcass strung up on the truck.. it wasn’t 34 (then my embalming experience clicked in as I was fascinated with the size of the organs) (got a strange look then, and even stranger when I said its ok I use to be an embalmer) (gosh I need to have a filter), I didn’t watch the slaughter part, Mal was there, as he knew it was important for me that he had to make sure things were done the way I needed them to be done. But with 33, that was sadder, we kept him to long, he bonded with us and the herd of highlands, so when he was slaughtered they spent a week crying for him, I was so upset by that, and promised the girls I would never do that to them again. By the way…None of the slaughtering was done in front of the rest of the herd. We have a small area especially for that, full of long scrumptious grass to keep the animals happy.

We have also sadly lost our dear old nanny goat. Remembering back to the goat blog? About Savannah the ex-milking goat, she passed away yesterday, very peacefully; I was with her, stroking her head, balling my eyes out. Little Spud was there too. I moved Savannah in with Spud into the smaller paddock, with shelter etc. as I could see she was deteriorating, she had fresh hay daily, and spent the last days laying in the sun and sheltered from the rain, snuggled up to Spud. Yesterday morning I went down to paddock to feed Spud I knew she was nearing death, I ran up to house and got Mal to get his gun (I didn’t want her to suffer) he came down and checked on her and said she’s not suffering and won’t do anything until he thinks she is, which she never did, so I sat with her (brought back memories of losing my grandma) (I never left her side either) I spoke to her and said its ok to go, It was sad. Very sad.
This morning Mal pipes up and says how about we do a Viking funeral for her…I said what do you mean?? Then realised he wanted to burn her, as our tradition is to bury the pets and plant a fruit tree, which is what I said to him yesterday. As for me they live on when the tree flowers, the bees pollenate and then providing fruit. But poor old Mal was thinking about the size of the hole he had to dig, and after the fruit tree digging he wasn’t keen, but it’s important we keep our tradition, so we will be burying her, and I know the perfect tree to plant, there is a variety of nashi pears that has the most amazing flowers, so it will be that one. Savannah was 12 years old. Rest in peace Savannah xx

And finally the babies, they are growing fast and are almost ready for breeding. Well Ruby and Loretta have shown signs of being ready now, and looks like William is ready also, however he needs to grow a bit taller, or we will have to get a step ladder for him…
I felt so sorry for him watching him trying to mount Ruby, and she was trying to help…it must have been very frustrating and demoralising…poor man (he couldn't reach)
January is the month for bubba making, as then we will have calves in spring, buying us time to get the land ready for the extra mouths to feed. The beauty of having Highland cattle is you don’t need to separate the bull, he can stay with the girls all the time, as he doesn’t mate until they are ready, so no unwanted or premature pregnancies.
As the babies grow... their colouring is becoming more evident. Booboo (panko) is losing her baby fuzz and becoming more Black (I hope she doesn’t lose the Dun (pale yellow) around her ears) BobBob is chocolate brown (still considered red but different shade) Taylor-rose appears to be brindle as she has speckles of black, red and dun over her and apparently the tell-tale sign of Brindle is black blotches around eyes and on nose which she has, really excited about this as I wanted a Brindle cow. William is growing a magnificent set of horns, and he is still such a cuddle bum. He loves cuddles!!!!
Sadly we have made the decision to remove Loretta’s horns, they are huge and she has no hesitation in using them. And because we never had her from the start I don’t trust her, plus I don’t want the babies learning her bad behaviour. She isn’t aggressive, I’m not scared of her, but one head flick and I could be impaled, and I need to be hands on with the babies and I would love to be more hands on with her, like I used to be, but since having Booboo she has become a bit of a stroppy coo. We will be getting the vet out to put her to sleep (I suggested vet speaks to Dr Danny)
And we are waiting for a week of fine weather to avoid infection.


Stay tuned for that adventure! However we are prepared this time, we have Yards!!! 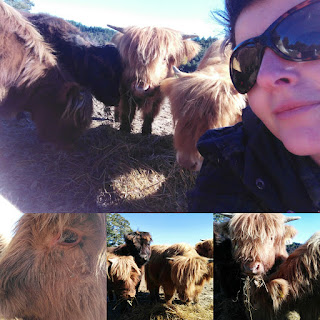 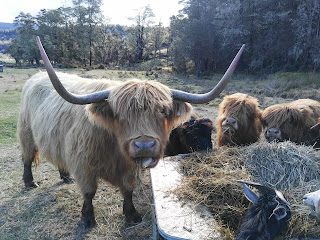 Still to come....fertilising!!! there is more to caring for coo's than just harrowing poo!
Weed spraying....we may be needing a helicopter...gulp!