PIGS its a shitty situation

yay!! finally have some motivation to write a blog post!!
So much has been going on here since my last post!!
One future story will be about one of our ducks, You will never look at fungal creams the same again!

So I hear you ask?! what has prompted me to get off my butt and finally start writing again?!
Animals of course, you see we have grown (physically also) (and not vertically) we have new fury family members. We now have eight Highlands, Two bulls (one hummel) the rest are heifers. We have two yearling steers (for freezer) an extra goat (another future story) One less Ram (Mal says yum!)
That's my only gripe about growing our own food, Mal takes it upon himself to eat it for breakfast, Morning tea, lunch, afternoon tea, and dinner. I constantly remind him of his previous doctors visit where they told him he had high cholesterol, (no shit! I thought) and... all the way home I had to listen to him complaining that if he was not Maori his cholesterol would be in normal range, but there is a different range for Maori which he conveniently argued was discriminatory. He's good!!.. that gave him (in his head) the excuse to not change his diet. He constantly argued that he is in normal range (just didn't say which range), then one day he went into labour and delivered (complicated birth) a very impressive gallstone, (the big boss surgeon ended up doing the surgery as they hadn't seen a gallstone that big before...sigh!) Once settled in recovery, still completely off his face on god knows what, he proudly rattles his new pride and joy (yes he asked to keep it) and (yes he named it) JOSS STONE!! (for goodness sake)
The positive of loosing 'Joss' is Mal cannot eat to much fatty food. However Mal never goes down without a fight and much like his argument about the cholesterol range, the tummy cramps (biliary colic) caused by excess fat consumption, is never caused by eating meat for breakfast, lunch and dinner.

I could keep going but really want to start discussing some things I have learnt recently. (I will continue Mal's logical all inspiring stories in future posts)

By this stage I had managed to get two sucks of electrolytes with probiotics and a little bit of manuka honey into him. But it was just flowing straight through him. I just hoped something stayed in.

It was around 11pm when I stopped and thought...what do I have here? I went through all the medicine containers, the animal container in shed, fridge etc... and gathered an eclectic mix of medications. Now to google if they are suitable for piglets, and dosage etc
by around 1am I had everything sussed, but fear set in. What if one of these things kill him? but if I don't he will die.
I have to try, I got courageous, I figured I had nothing to loose, and if he dies and I didn't try, I would never forgive myself. So first up, antibiotics (this scared me) as it is injectable, but I didn't have a needle small enough so had to find out if I could give it to him orally, and if so what dosage?
all I found on google was a chicken site saying they give this to their chickens orally, nothing about piglets, so I was taking a risk. I measured a dose of 2ml and squirted it down his throat, next was scour ban (I had from our orphan lambs, but had no idea if it was ok for pigs. as our neighbour gave it to us in a jar, so no dosage or instructions, so googled it to find it is ok to use. no dosage though, so I guessed and put 1ml in his bottle. I ended up syringe feeding him by this stage.
Well that was it, I needed some sleep, and had to let things be what they will be. I set my alarm for 3.00am popped baby in his bed near the fire and I made up a bed on the couch. I was to scared to go to sleep as I had no idea what I was going to wake up to. But eventually I did fall asleep.
I was awoken my a screaming grunting noise, I jumped up looked at my phone, 4.20am, bloody alarm didn't go off (would have helped if I set it to am not pm) the piglet was starving, he was carrying on for food, so gave him the electrolytes, which he gulped down...woohoo!!! he went back to sleep, then 2 hours later he started again, so gave him diluted formula with scour ban in it. Still no runny poop. I was in shock, what a turn around! I couldn't wipe the smile off my face...what a relief!!!

Today he is 6 days old, and is thriving. Actually he is the best I have seen him. He wants to walk around, nuzzles etc and doing the most perfect poos! Who would have thought I would be happy to see a pig turd..Ha!

So here is the mix of found meds I used on piglet. 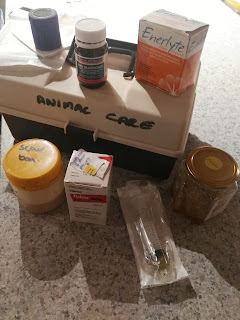 Enerlyte mix 1 sachet to 200ml of clean water
IBS Support is my personal probiotic, i broke open a capsule and sprinkled less than a quarter in the 200ml of enerlyte.
Tylan 200 injectable, is the antibiotic. I gave piglet 2ml orally.
Manuka honey I mixed in diluted formula. I wouldn't recommend using it though. I think piglet had E-Coli (Im no vet but he had all the symptoms and his poop was clear) so honey being sweet, feeds bacteria. I would certainly use this on cuts though.
Scour ban 1-2ml morning and night. I only gave him 2 doses.
What really prompted me to write this blog was the lack of information on how to bind the piglets poop. I looked everywhere trying to find a site that said use scour ban!!!
SO I'M SAYING IT...SCOUR BAN.
Also if the diarrhoea is profuse, stop milk formula and just give electrolytes. And if you can get the piglet to the vet (I couldn't)  This is just to be used in desperate situation, I don't recommend not getting your piglet vet checked.

We need to name him also any ideas floating around out there in cyber space?

Next on our piglet list is to get his foot checked, his mumma injured it, and he hasn't been putting weight on it. I want to get it sorted while he is young, and lite.
You see Large Black Pigs grow quite large (something I failed to mention to Mal) Here is the link to this breed of pig, very interesting read! https://www.rarebreeds.co.nz/largeblackpro.html
It says a male pig will grow upto 360kgs. I think if I say it to Mal really fast he will never notice :) 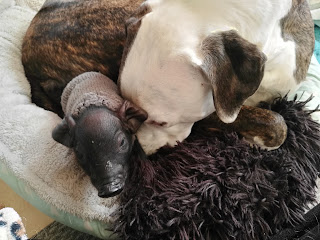