I thought since I am trapped inside I would write my next blog. Have been procrastinating over whether to tell the story of the Horses (tissue alert) or something a bit more light hearted. Think since its dark and gloomy I should chat about the funnier things that has been going on. The weather report looks like I may have time to write about the horses tomorrow!!!
So here goes! Probably best to not be eating when reading this
Well I have been ‘Coo Girling’ it now for the past five months. I have never worked nor been up close to cattle (other than a horrific incident when camping at Robin Hood Bay) Actually now I mention it that should have been enough to make me realise what I was in for.  You see I have discovered a few things about farming; I call them ‘The lessons learned’
Figured I would bullet point them (could be useful for anyone else embarking on farming) especially if you are like me and was raised in the city.


Last but certainly not least

I have learned a lot about farming already, and at the same time a lot about myself, our marriage and our family. Strength is in working together and supporting each other. Yes life must look great from the outside, and yes we are living the dream. But nothing comes easy and at times we get so exhausted that everything seems so shit.
But if everything came easy what would we have to appreciate?  I feel blessed to live here. I have learned a whole new level of respect for the essentials (and not so essential) in life, like water, power, food and sunlight (and really good deodorant) we are heavily reliant on these.  I have removed our microwave, we will never be able to use a hair dryer, a food processor is now replaced with, bloody good elbow grease and vacuuming gets done when the generator is on (making us aware of when things start costing money) I find it very fascinating what appliances cost the most to run, and it’s the ones you would never think of. We no longer have a toaster, toast is now cooked on the hotplate of the fire and nothing is better than a nice pot of pumpkin soup cooked and simmering on the fire. We have a new found respect for the simple things in life.
Happiness now comes from the environment we live in, from spending time with the Coos,  watching number 3 child ride her horse, lying in bed looking at the stars and listening to the moreporks at night or simply sitting on the deck and watch nature at its best.

You see Mal loves me when I am covered in hay, poo and stink like an old sock. He can see how happy I am which in turn makes him happy…and likewise (except for the mullet).

Update on Booboo
Look at her now!!! And she has little horn buds…so cute!!! 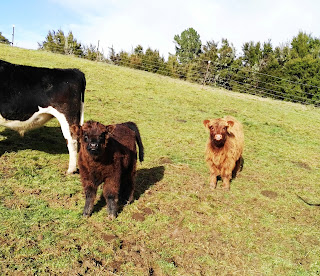 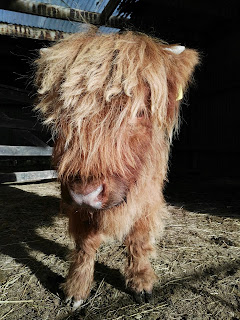 William Wallis our breeding bull calf and very naughty boy!
But gosh I love him!!
Posted by Lisa at 22:44