I never thought in a million years I would be writing (from personal experience) about a heinous virus called rotavirus. It prays on the young and vulnerable and attacks with such harsh force and so quickly you don’t even get a chance to blink.

So how did we get this killer on our farm? Naivety and trust. I often wonder (in farming) whether believing in people is dam right stupid, but we did, and we brought two bobby calves from a dairy farmer (not a word spoken about sick calf’s). Did we ask? No, should have we asked? Some would say yes others like us didn’t know we needed to ask about something we had no idea about. I always thought rotavirus was something that only hit rest homes (city girl still lurks in me).
Once we got the calves home I noticed one of them was rather quiet, but we put that down to his personality. But the next day I noticed blood in his poo, his poo was yellow and a lot of mucous also. WARNING SIGN take note! Blood in poo and or mucous, put calf on Rotagen immediately!!. We had no idea, but I knew that was not normal, so I rang vet. We couldn’t see our usual vet so drove the calf (in the back of my brand-new Outlander) 40mins to Murchison vets, longest 40mins of my life as mal made me sit in the back with the calf!   He (the calf)   … (we will call this number three’s) all through my car. I was covered in shit and balling my eyes out (not because of poop) (had no idea at that stage we could contract this) but absolute fear of losing this little guy. Vet checked him out in the car, gave him a shot of antibiotics, showed us how to tube feed electrolytes into him and took poo sample for testing. It takes 24 hours to get results which (in hindsight) gave us no chance in saving this little guy. By the time we got the results and told to find some Rotagen (as there is a major shortage in New Zealand and would be another 24 hour wait to get it) time was running out. As quickly as we were tubing liquids in, it was coming straight back out. My biggest stress was wondering if I’m giving him enough, or too much?, as his tummy was huge. He fought on for another 12 hours before I screamed out to mal that his breathing changed, I was hysterical. Mal came out and we both tried to get baby up, tried to stimulate him (while Betty our other bobby calf sat and watched) We both stopped and held him while he took his last breath. He was six days old, his name was Butch, and he was loved. He wasn’t just a Bobby Calf to us, he was a baby, taken from his mum, driven to a foreign place and put onto different feed, his fate was sealed the day he left the farm and came to us. He was cuddled, patted, and instantly stole a piece of our hearts. Gosh I’m tearing up writing this.
I had been in communication with the farmer who offered a replacement, I hate that word, but it’s true we got another calf, but I asked if it could stay on mum, which it did for six days, and when we picked him up we immediately started  the rotagen preventative dose. The label states to keep them on that for five days, so I did. I followed all instructions; we had the foot washes, cleaned out the pen and sterilised with bleach etc… we did everything everyone told us to do. A day shy of his three week birthday he was dead. The same day I noticed blood in his poo, I instantly called the vet, rang the farmer to get more rotagen. Four hours later he was dead, he didn’t even get a chance to scour, his body shut down. I will never forget screaming (again) for mal to go get his gun! frantically running around the house looking for mal, not knowing he went into the calf shed (instead of getting his gun) sitting trying to stimulate him, yelling to get up. I quietly walked in and said “hun, he’s gone” we sat there for what seemed like only a moment but was well over an hour. Mal got up, grabbed the shovel and began digging.
Later that evening I noticed the cows behaving strangely down near the barn. They were gathered in a circle mooing, I walked down to investigate and was gobsmacked with what greeted me. Loretta had her baby!
One life ends another begins.
I thought ‘here we go again’ I ran up to the house grabbed Mal, we stood until dark (3 hours) waiting for baby to feed, it was more important than ever now, that baby got colostrum! She has entered the world at the worst possible time!

I don’t want the deaths of these babies to not mean anything as they were everything to us. If anything, sharing our story could help others. If it saves a calf, then these babies didn’t die for nothing.

What haunts me the most is if we had have known they were unwell or potentially could become unwell, we would have been prepared. Yes we still would have got them. They would have been shot if we didn't take them, and I wouldn't cope knowing that. We would have had all the protocols in place and rotagen would have started, and no unnecessary deaths. 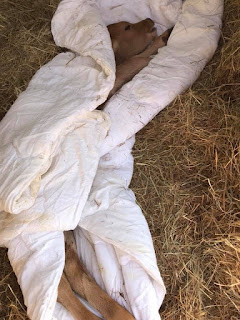 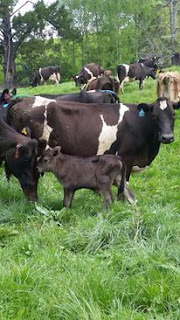 This photo breaks my heart. Here is Bam Bam with his mum. I felt I had let her down. We killed her baby.

So here are some tips
I want to emphasise I am not a vet and this should not be used in place of a vet.

I decided to ask a dairy farmer (not the farmer we got the calves from).
He said

Here is our surviving bobby calf we have named Betty Davis (because look at those eyes!!)
she is off the rotagen and on the probiotics. She will live a long and loving life with us on the farm. She is even more special now xx 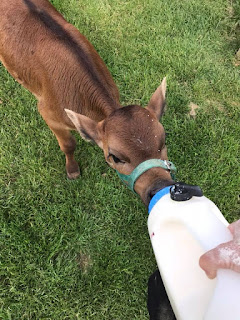 To date our Vet cost is around 1500.00 and climbing. Our Vet advised us to vaccinate next seasons cows and even after that once calf born continue the Rotagen Preventative. No one really knows for sure how long the virus stays in the ground. And Yes Loretta's calf contracted rotavirus, but we knew exactly what we were doing and are currently winning the battle.
Ruby had her calf a week later and within two days she started scouring also, again we were prepared. What helped our Highland calves fight this was keeping them on mum. It does mean I battle grumpy mothers twice a day as I grab the calves to drench the rotagen into them, which is not for the faint hearted. But watching the babies running around the paddocks makes all the bruises worth it.