So much has been happening here at Plum Tree farm. I am finding it hard to stay on track with the order in topics I want to discuss. Let’s just say, we are still waiting for Loretta to drop her bundle…yes...That might mean Ruby had her baby!!! But you will have to wait to hear about that. (Poor Dr Danny)

So about 6 weeks ago a couple of gorgeous pictures were posted on the Nelson SPCA Facebook page (and by all the tags I received from my friends) I had no choice but to checkout this particular post. Two of the most gorgeous goats (images somewhat resembling mugshots) (should have been a warning) dumped on a golf course. Mal and I had been discussing getting goats as they are great at cleaning up the land. So without hesitation we jumped at the opportunity to adopt them. So within 24 hours we were picking up two goats with the warning they are Houdini’s; I reassured the SPCA our land is fully deer fenced. Didn’t breathe a word of ‘The Great Escape’.
So we settled them in and (after a request from my brother) we named them Aaron and Brad (named after my brother and his partner of course). The goats had been neutered but told by SPCA one still had a nut! (Aaron). As the goats began to settle in it became apparent that Aaron’s one nut might actually still be functional, he became very friendly (if you know what I mean). At first Mal and I thought there must have been something wrong with him, we were concerned that he may be in pain; as his willy would become evident and he would urinate and lick it, rather unflattering behaviour to say the least! We soon discovered this was typically 'Billy Goat' behaviour. We promptly decided to change their names as it was too weird to have a very amorous goat named after my brother , so we decided to let Taylor (number 3 child) name them (something we try to avoid for obvious reasons) Aaron became yllib and Brad became taog…yup! Billy Goat backwards, Thank you Taylor!!

Mal being Mal nicknamed them (he does this with everything, for example Snoop is shit lips I guess you can imagine why) So Yllib became ‘One Nut’ and Taog became ‘Toe Rag’ too funny!! Sounds bad but they actually suit it...
Toe Rag and One Nut friended number 33 and 34 the four of them became inseparable (except when number 33 had his unfavourable side effect from the salt lick block) that certainly tested the friendship!!

While this awesome foursome were hanging out doing goat and cow things (pretty much eating and pooing) Mal and I were still moving into the farm. Mal needed to go to the hardware store to collect some ropes to help secure the loads of furniture, simple task right?! Well 2hours later he appears with the rope and a long list of people he bumped into…we have a  nickname for Mal ‘Mr Have a chat’ during his 2 hour gas bagging he managed to source (get this) two goats, two alpacas and a partridge in a pear tree! This is the moment where I just shake my head.
So after much thought we agreed on getting the goats and holding off on the Alpacas (until we get our land sorted) so the delivery of two more goats!! These two were already named, Savannah a 6 year old nanny goat and Bruiser, Savannah’s grandson. These were milking goats, well Savannah was. She had spent her entire life (6 years) on a concrete floor in a milking pen. She never stepped foot on grass let alone graze on it. I don’t judge, clearly the people loved her as we had a long list of all the things she liked etc. But a part of me felt very sad for her and even sadder when we put her in paddock with the awesome foursome and she had no idea what to do. Bruiser adjusted very quickly, but Savannah struggled. I was concerned that she would starve as she has been thrown into an environment she had no idea about. Mal reassured me she will be fine and after a worrisome few weeks she is now embracing her goatness, so wonderful to watch her climb the hills, munch on gorse, and hangout enjoying the freedom of the lower paddocks with her new pals. Makes me all warm and fuzzy!!! Now we were told (because Savannah was a milking goat) one of her teats would fill and might need expressing (I chose not to listen to that…Yuk!)  But we have to keep tabs on her teats.

Now..we let a local beekeeper put some of his hives down in the lower paddock under the Manuka trees, in return we get as much honey as we want, yummo!! The cows and goats don’t mind the bees and they LOVE the bee man!! Especially One Nut. I had no idea the poor bee man was getting harassed every time he attended the bees, until he approached me almost begging for me to pen the goats in another paddock (which isn’t really that easy when I am not always here to do that) The bee man is a lovely man with a very strong European accent which makes it even more humorous when he tries to explain what is happening, and who the main culprit is…yup! ‘One Nut’ the bee man said the Goats won’t leave him alone, jumping all over his truck etc. Then he said “they are very friendly, especially the black one” (One Nut) I tried so hard to keep an empathetic expression but the visual image of what ‘One Nut’ was doing to the bee man, in his white bee suit, while attempting to attended the bees, was to much!!!! The laughter roared out of me… I know very immature…you had to be there. So after a very awkward outburst of laughter we came to the agreement he ties the goats up while he attends the bees, and releases them once he is finished. I must make sure I am around to watch him attempt to tie ‘One Nut’ .
So back to the teat watching, a couple of days ago I noticed Savannah’s teat was rather large, so Mal decided to try and express it, which proved to be a bit more complex than originally thought. What didn’t help was ‘One Nut’ and ‘Toe Rag’ kept getting in the way, jumping up and trying to smooch us!! poor Savannah started to get a bit flustered with all the attention, the last straw for her was Mal grabbing her teat and squeezing it while yelling at me to get around her back region and hold her still (don’t know why I can’t hold her head) as we all know what a nervous goat does! Thanks Mal!! So I am presuming you all are wondering how much milk we got?! Zero, nil, zilch, zippo, none! I think we have mentally scared poor Savannah also, and yet again I will have to swallow my pride and make a SOS call…sigh
On a positive!! It won’t be Dr Danny this time!! Ha!


I will let you know how we get on learning to milk Savannah. The thought makes me quite squeamish (as there is a very good reason why I don’t drink milk) and flavour is not one of them. 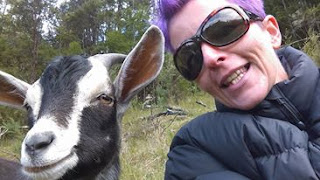 Me with 'One Nut' (he has a beautiful smile) 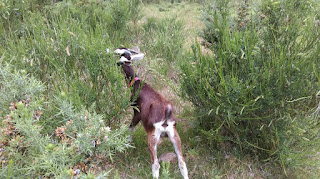 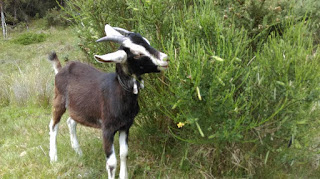