The hills are alive with the sound of Coos

Well it seems like yesterday that I posted the last blog, but actually it’s been over a month!! Time Flies!!!! When you’re playing with coos.

Gosh we love them!

Loretta and Ruby have had their babies, two girls. Ruby’s baby is a red fuzz ball we have named, Lucy (Mal nicknamed, Bob Bob) and Loretta’s is a pitch black fuzzy wuzzy we named Pango (mal has nicknamed Booboo) both nicknames have kind of stuck. (pango is Maori for Black).

Booboo is a sweet heart; she is our golden egg, as Black highlands look mighty magnificent and not a very common colour, so we intend to breed her to get more black fuzz balls. Bob Bob is 4 weeks older and a real little shit! But very cute! We are attempting to catch her to pop a halter on, but we have realised we may have left it a bit late (something we don’t intend on doing with Booboo). We managed to herd Bob Bob in the stable (Mal wrestling her down yelling at me to get the halter on), I was somewhat distracted by the two screaming, angry cows on the other side of a rickety old gate. Before we knew it Bob Bob wacked Mal in his two golden eggs, popped her head under the gate lifting it off its hinges and escaped, we then had mamma coo and aunty coo to contend with, both not very impressed. Let’s just say I don’t recall jumping the fence! Mal is still a bit bitter with me for leaving him, but hey I haven’t sorted my life insurance yet! Mals injury was nothing a bag of ice couldn’t fix.

Anyhooo…we discovered Ruby had Bob Bob early (very early) I am relieved I did know this as I know I would have panicked. I wasn’t at the farm when it happened, I was guilted (by number 3 child) in spending the week in Nelson house with her, as she said she never sees me (gosh she is good with the guilt trips) (gotta love 16year olds) so Wednesday Mal rang me with the news that Ruby had her baby, I cried…I was so gutted I wasn’t there and couldn’t be there until tomorrow. But as soon as I dropped number 3 child at bus, I was gone!! I arrived at 12noon(ish) I had the biggest and greatest of expectations of calves and their mammas, I guess a romanticized dream. Cause boy was it not so! What I imagined… (Remember the introduction…no farming experience) was how it was for me when I had my children, I was besotted with them, never leaving them and incredibly over protective. Well did I get a rude shock when I arrived to find Ruby…No calf in sight!!
I walked the entire section three times, by the third I was absolutely beside myself, so bad I ended up ringing mal (who was at work) I couldn’t find bubba anywhere! And I was even more confused to see Ruby couldn’t care less! So little did I realise…Coo’s hide their calves. Ruby knew exactly where her baby was and she was not letting on…so after hours of manically rummaging through some of the roughest terrain, I found her…HA! Ruby!!! You should have seen her face!! Yeah I won that round! So once I found her I got her up to the paddock to her mum and went about the day. I kept a very close eye on baby as I was very aware she hadn’t fed and it was a good 3 to four hours to find her. After another 2 hours I was getting pretty stressed again…I began to get concerned she was going far too long without food and decided to ring around for some advice. After ringing pretty much everyone in the vicinity from the neighbour the animal farm, and the breeders we have purchased our other coos from (future post) all were away from the phone, I decided to ring good old Dr Danny..I left him to last as I tried to avoid ringing him as I knew he would find it rather humorous. Which he did, but I didn’t care by this stage. He reassured me that within the first days babies don’t eat much, and sleep often. He said if baby hadn’t eaten by end of the day to let him know…well pretty much as soon as I hung up the phone the little turd began to fed from her mum. Phew! (If only this happened five minutes prior to my five hundred SOS phone calls…sigh!)

Loretta was next to become a mamma, and again I missed it. I knew she was close so stayed home to avoid missing it…but as soon as I left to go grocery shopping she had her baby. I got back to see the finale…Loretta eating the afterbirth (vomit) I could have sworn Ruby didn’t eat hers as I caught Snoop eating and rolling in it (I almost lost my lunch when I saw that!). Mal reassured me it is a good source of vitamins for her (thank goodness I am not a coo!)
We were pretty thrilled to say the least about having a Black female calf; this little bubba is what we will focus our dream on. Breeding rare coloured highlands, we are curious to see if she grows horns (as dad is a Hummel) (a highland without horns). We were pretty prepared Pango wasn’t going to feed often but what we noticed is mum wasn’t great at washing her baby, especially around the bum (I would have thought if you can stomach eating the after birth a shitty bum is nothing..Right?!) Well not so for Loretta, so it became my job. Every day I have to separate mum and baby (which you can imagine is not a pleasant experience) I removed the hard poop from around her bum and give it a wash. After a couple of days I had mal come with me, as it’s a juggle trying to hold the calf lift its tail and then attempt to wash. This particular day Mal held Booboo which enabled me to have a good look at her bottom (as I had noticed she was trying to scratch her rare constantly) I was horrified with what I saw…Maggots!! Everywhere up her little bottom and up her girl thingy….I panicked! Mal just kept saying to me to get them out, wash the area really well which I did with another bad case of Tourette’s!


As the day went on we noticed she was still scratching her rare, I decided to google cows with maggots and read that it can be extremely dangerous, so I rang the vet (this was good Friday…ouch!) who was awesome and came within the hour and fixed her up. We must thank our wonderful neighbours at HuHa Farmstay for helping us out with some Maggo; we have had to spray her bottom every day for a week. Since I had to do this I figured I might as well begin to halter train her (thanks again to google) I really enjoy my bum spraying time with Booboo she is so beautiful, such a gentle natured coo. I cuddle her, scratch her and talk to her (while mum is on the other side of the fence mooing her head off…if only I understood coo talk I can pretty much guess what she is saying!! But she is getting used to it, and she trusts me...I know she does, she doesn’t have a go at me just very vocal, I am very reassuring to Loretta and she even lets me brush her with Booboo nearby. Bob Bob is going to take some time and that’s fine…our object is to not terrify the crap out of these babies, we are about respecting them and ethically training them, Bob Bob is an anxious calf. Nothing cow nuts and molasses can’t fix…she just needs to be 100% weaned first. And at the end of the day, they are animals; they don’t know our language, our behaviours. We can’t expect them to be like us and understand us without introducing ourselves. Just because they are animals doesn’t mean we don’t offer them respect. 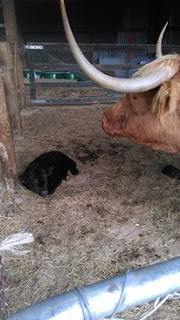 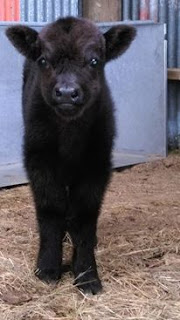 Booboo prior to bum wash 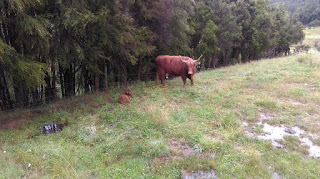 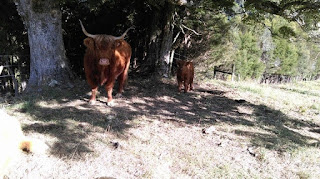